One area of confusion in production safety testing is the dielectric strength test, sometimes known the as dielectric withstand test or “hipot” test.

This test is usually applied between the secondary output and chassis ground and then between the AC connection (primary) and ground / secondary. This test can identify any assembly errors such as a pinched wire. 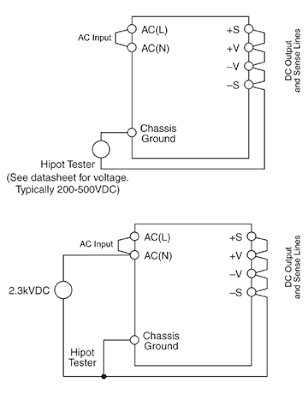 It is important to ensure to short the line and neutral together during the test, and when making the primary to secondary test, connect the secondary side to chassis. Short the output terminals together if testing a standalone power supply. Failure to do this can result in damage to the power supply.

A routine question is “should the test voltage be AC or DC?” The majority of power supply manufacturers use a DC voltage because the leakage current through the “Y” capacitors can mask another fault.

The “Y” capacitors are identified in a very simplified diagram below are used to reduce EMI and electrical noise. 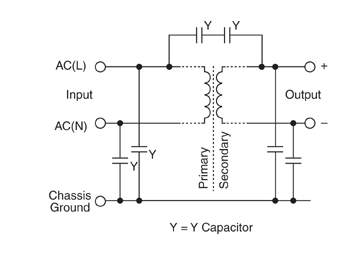 As can be seen, applying an AC input to chassis hipot test would result in mill-Amps of current flowing through the capacitors

Apply the DC voltage slowly to allow the capacitors to charge up without tripping the current limit of the test equipment. Remember to discharge the capacitors after the test.
Posted by Power Guy at 2:53 PM