Portable diesel generator sets are often used to provide AC power to temporary outdoor public events, like festivals, promotions and concerts.  It is now common to have large HD screen displays and a host of other electronics being used to provide additional multimedia.
When asked about running electronic power supplies on portable generators, we tend to consider the waveform quality, distortion and high voltage noise spikes.  Upon further research, this may not be our greatest concern.

I mention portable generators, rather than the fixed location, back-up generators that many facilities have in place against power outages.  The fixed generator would typically provide power to a number of different load types, such as heating, cooling, lighting, machinery and office equipment.  These loads would change, but not significantly during operation, and it would be reasonably safe to assume that there would be a “base-load” that remains present at all times.

With a portable location, that might not be the case, particularly during a break in the event schedule or at the end of a set when the power draw drops dramatically.  When this occurs, there could be significant rise in the generator output voltage before it compensates for the light load. 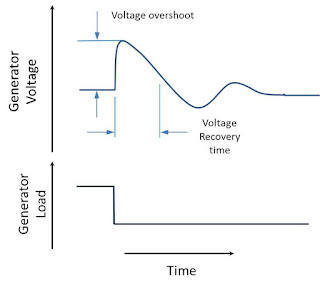 Until ISO 8528 was published, generator specifications were governed by local country standards, with many of the tests only ensuring that the generator could handle and recover from large load steps. Now, under the governor section of the standard, in section ISO 8528-1-7, the response regulation states four performance standards.

Class G1 – Used for applications where the connected loads only require the basic parameters to be specified.  This includes general purpose applications like lighting and electrical loads which can easily withstand the input voltage surges.

Class G2 – Required for applications where regulation is not that critical and temporary deviations are acceptable.  Lighting systems, pumps, fans and hoists have some tolerance to frequency and voltage.

Class G4 – Required for applications where the demands are extremely severe.  This typically includes data-processing and computer equipment.

The limits for these deviations are shown below.

For different regions around the world this means the following overshoot profiles are possible:

The input voltage rating for many off the shelf AC-DC power supplies is 85/90Vac to 264Vac.  Recently though, a number of manufacturers have added a peak voltage rating of 300Vac for five seconds.  This is usually found on enclosed type of product, like TDK-Lambda’s RWS-B series of 50 to 600W industrial power supplies.

Looking at the tables above, the newer generation of power supplies with a peak rating of 300Vac for 5 seconds may be used on Class G3 generators.  Depending on the extent of the anticipated load changes where there is a base-line of fixed load, can probably be used with Class G2.

As open frame (embedded) power supplies tend to be used in ITE equipment, that surge rating is not usually specified, and a Class G4 generator should be utilized.

The concern is that the choice of generator will probably lie with the event organiser, and they may opt for a lower cost Class G1 or G2 if they are not familiar with the standards.  If an equipment manufacturer believes that their product may get used with portable generators, they should consider using an AC-DC power supply with a 300Vac surge rating.  Any product literature should state the minimum class of generator to be used for reliable operation.
Posted by Power Guy at 10:11 AM