What do buffer modules do and how do I use them?

When the AC input to the power supply is interrupted for a period longer than the power supply’s hold-up time, the addition of a buffer module will continue to provide power to the load until its stored energy is depleted.  Without a buffer module, short interruptions of greater than 10 to 20ms may cause a system to reboot, or leave a machine (like a robotic arm) in an undesirable state or position; hence the term “buffer module”, as it “buffers” the load from interruptions of the AC power.

An uninterruptable power supply (UPS) could be used; however it would consume more energy, cost more to operate, and add considerable cost to the system. As batteries are normally used to store the back-up energy, periodic preventative maintenance and battery replacement is required.  Could a bank of capacitors be attached across the output of the power supply?  Yes, maybe, but I suggest you read a previous blog article outlining the pros and cons of doing so.

How do I connect them?

The buffer module is connected in the same way as additional capacitors would be, across the power supply / load.  See Figure 1.

Figure 1: Connection of a buffer module

What will they do?

Current will only flow into the buffer module when it needs charging. It will only flow out (discharge) to the load when the AC input is interrupted and the output voltage of the AC-DC power supply to starts to decrease.

Figure 2 shows that without a buffer module, the voltage to the load will drop once the power supply’s hold-up time “T” is exceeded, typically within 10 to 20ms.

Figure 2: No buffer module in circuit

With a buffer module in circuit (Figure 3), the voltage to the load is present during a brief loss of the AC. Time “T” is the power supply’s hold-up and time “Tb” is the additional hold-up provided by the buffer module. The maximum value of Tb will depend on the energy shortage capability of the buffer module and the amount of load being drawn.

The extended hold-up from the buffer module can also be used to provide power to the load for a longer period of time. This may allow a piece of machinery to safely shutdown or store information on the progress of a particular process.  Figure 4 shows this.

The time Tb is stated on the manufacturer’s datasheet at a specified power level.  The 20A rated TDK-Lambda DBM20 for example provides an additional 250ms at a power level of 448W.  When operated at lower power / current levels, the hold-up increases, see Figure 5.

If the load is 5A, the buffer time (Tb) will be just under 1 second. Buffer modules like TDK-Lambda’s DBM20 and ZBM20 utilize high quality electrolytic capacitors to store the energy.  This eliminates the use of rechargeable batteries and any necessary servicing or periodic maintenance. The curves labelled as “typical” include the tolerance in the electrolytic capacitors.  Buffer modules can usually be connected in parallel to further extend the time Tb.

These terms can be seen on some datasheets and a switch found on the buffer module (Figure 6). 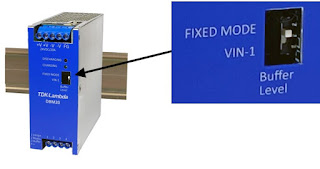 When the switch is in “Fixed Mode” the output voltage will be set at the factory setting. For our DBM20 that is 22.4V for use with a 24V AC-DC power supply. When the AC is interrupted, the buffer module will start supplying power to the load at 22.4V.   This provides hysteresis to stop the buffer module from discharging unnecessarily. Note in Figure 3 and 4, the output has dropped slightly (24V vs. 22.4V).

The TDK-Lambda ZBM20 module mentioned in this article is a similar product suitable for non-DIN-rail mount applications.