Power Supply Efficiency – How Important is it?

ENERGY STAR®’s decision to “sunset” programs for EPSs (External Power Supplies), and applications using them, has raised the question “Does this mean that power supply efficiency is no longer a concern?”

In a mainly cost driven power supply market, product marketing is often challenged during a new product business plan review, regarding the demand for high efficiency on the product specification.

The biggest requestor of high efficiency power supplies are the manufacturers of large data centers, primarily because of the huge amount of electricity they consume.  In 2007 the EPA estimated that the national annual electricity cost for servers and data centers could be a staggering $7.4 billion in 2011.

Power supply manufacturers have been told by data center producers that they are willing to pay (a little) more for higher efficiency products, because the operators are aware that the ROI is quite short.  TDK-Lambda also is participating in the evaluation and use of DC power systems.

DC power systems for data centers use up to 15% less power by removing one or more conversion stage by supplying ~380VDC to the servers rather than high voltage AC.

The US government has had the 80 Plus program in place for servers and computers for a number of years with a variety of efficiency levels ranging from a basic level to “platinum”.

In consumer electronics where although the power draw is quite small (particularly in standby), there are 100s of millions of devices deployed (laptop power supplies, phone & camera chargers & LCD TVs to mention a few) and the overall energy usage is considerable.  The main drivers for efficiency improvement are the state and utility companies, because of the cost and time to build new power stations.  The average consumer is not that concerned as it will not dramatically affect their electricity bill.

As an industrial power supply manufacturer, TDK-Lambda is being asked by some customers for higher efficiency power supplies.  These customers are selling to end users like hospitals or large retailers who are going "green".  Where the purchaser is not being mandated to reduce energy consumption or is driven by price, the efficiency “sell” usually fails. 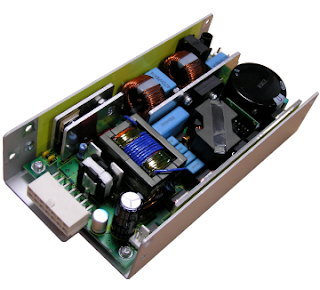 TDK-Lambda also supplies two of the major automotive manufacturers the DC-DC converters for hybrid electric vehicles and is developing new products for a host of upcoming electric cars.  Efficiency standards of automobiles is something that the purchaser understands, primarily because of the cost of running a vehicle is significant.
Posted by Power Guy at 8:43 AM

Thanks for the tutorial, very interesting.

Well your site is very informative and it will be equally worthwhile.Well thanks for this information it will really gonna help a lot of people. National Power Supply Engines