Most power supplies have some form of an internal inrush current limiting circuit.  This avoids a large current being drawn when AC is first applied, causing a circuit breaker to trip or an external fuse to blow. 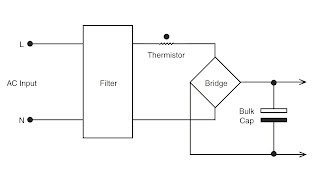 A typical inrush current plot for 115VAC input looks like this:


You can see the AC is applied at the peak of the AC input voltage to measure worse case conditions.  The peak inrush current is 25.65A for a period of 2-3ms with what we call a cold start, in that the inrush thermistor is initially at room temperature (and in a high resistance state).

If we were to expand the time scale, on top of that peak would be a larger spike of current with a pulse width of less than 200μs, generated by the “X capacitors” charging up.  X capacitors are fitted across the input to reduce electrical high frequency noise from exiting the power supply.  As this is a low energy spike, most power supply manufacturers exclude it from the inrush current specification.  The energy drawn is so small it will not trip a circuit breaker, or blow a fuse.

Many customers are confused with the external fuse rating suggestion found in the installation manual.  They see from the power supply datasheet that the inrush current is say 30A, but then read from the application note that the recommended external fuse is only 4A (which corresponds to a steady state input current draw by the power supply of around 2A).

This prompts a call to our technical support group saying that they believe there is an error in the application note.

Most of those application notes specify the use of a time delay, or "slo-blo" fuse.

Looking at Littlefuse®'s datasheet for such a 4A fuse we can see from the graph that the average time for the fuse to open varies with the length of time the current passes through the fuse.

Going back to the power supply evaluation data, one can see that the inrush current is a maximum of 25.65A and that the time for that pulse is say 3ms (worst case).  From the above graph, even at 10ms (0.01s) the current would have to be some 70A for the 4A fuse to blow, giving an adequate design margin.

If a fast acting fuse (type F) had been chosen, the pulse current for the fuse to open would be approximately 30A, which is why we recommend that slo-blo (type T) fuses be used.
Posted by Power Guy at 10:12 AM