A common question asked by our customers is “what are the power supply’s rise and fall output characteristics?” Our usual answer “it depends” sometimes raises an eyebrow. Let’s have a look at why.
As you know, there are two ways a power supply can be turned-on and off. One method is to apply or remove the AC input power via a switch or circuit breaker to the supply. Another method is use the Remote On/Off control of the supply, if the unit has this feature. Let’s examine both methods.

The curves below (Fig. 1) show the typical delay between when the AC input power (Vin) is applied and the power supply’s output reaches its rated voltage of 12V under full load conditions. As can be seen (in this example) with a low AC input of 85VAC the output turn-on delay is slightly more than with higher input voltages. However, in this example, the typical turn-on delay is about 250ms and the output rise time is about 25ms.
Conditions: 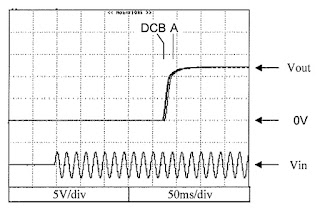 Fig. 1
The next curves (Fig. 2) show the same power supply’s output (with 100% load) when the AC input is removed. The time delay from when the AC power is removed (or lost) is referred to as the Hold-Up time spec. For this supply, the specified minimum hold-up time is 16ms. As shown below, the measured hold-up time is about 30ms, which meets the spec. The output fall time is approximately 10ms, when measured from 90% to 10%. Note that the energy is pulled from the power supply very quickly due to the heavy load on its output. 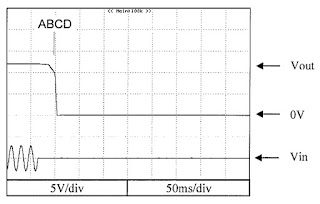 By comparison, without a load (zero load), the curves below (Fig. 3) show that the Hold-Up time of the power supply increases substantially to about 1.8 seconds, and the output drops to zero in about 6 seconds! 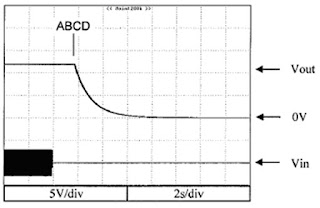 Below is a graph (Fig. 4) for this power supply that shows how minimum Hold-Up time varies as the load changes between 10% and 100% (maximum load). 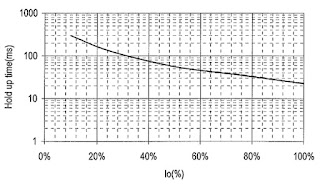 Next, we shall review how the remote on/off control (if used) can affect the power supply’s output rise/fall, and delay times. 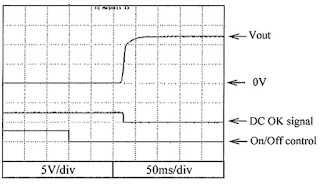 In the above curves (Fig. 5), the remote On/Off control is the bottom trace and above that is the power supply’s DC OK signal level. This situation assumes the AC input in always on. As can be seen, from the time the Remote On is activated (goes from high to low logic level); it takes the output about 150ms to reach its full rated voltage. And, the DC OK signal changes state when the output level is about 75% of its rated voltage, which in this case is about 125ms after the Remote On signal is activated.

The next set of curves (Fig. 6) show the reverse situation, where the Remote On/Off signal is used to turn the power supply off. 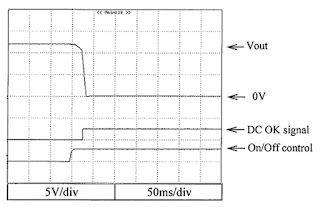 There is about 25ms delay after the Remote On/Off changes state to when the Vout reduces to approximately 75% its nominal. In addition, at that time the DC OK signal changes state. The output fall time, from 90% to 10% of nominal, is approximately 15ms.

From the above curves and explanations, I believe the reader can see why our answer at the beginning was "it depends." In these types of measurements, delay times are in many cases more important than rise and fall times. Other considerations include the AC input voltage, the load, operating temperatures, measurement criteria and the design specifications for the power supply.