What Size Heatsink Do I Need?

Today there are a large array of high power modules in the range of 300 to 1,000-watts, both DC-DC converters as well as AC-DC power modules, which are commonly referred to as “bricks.” Even though these devices feature high conversion efficiencies in the area of 85 to 90% (or higher), some power is lost in the form of heat that must be dealt with in order to maximize the lifespan of the end product. For example, a 500-watt power module with 90% conversion efficiency would generate over 55-watts of wasted heat within the module that must be removed to maximize its reliability.


The concentrated power density (watts per cubic inch) within these power modules make them a challenge to cool in real world applications. Most high power bricks are packaged in thermally conductive plastic or epoxy cases with integral metal baseplates. The high power components within the bricks (i.e., semiconductors, inductors, transformers, etc.) are thermally coupled to these baseplates, which in turn can be attached to external heatsinks or liquid-cooled cold plates in order to keep the baseplate at or below its maximum operating temperature (typically 85 to 100°C). 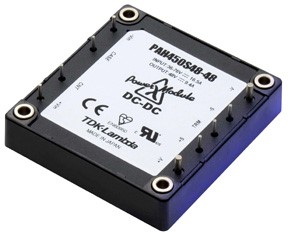 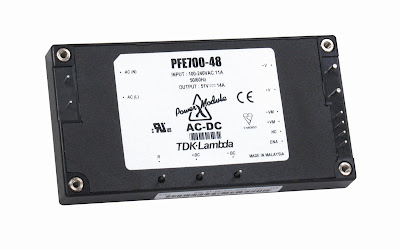 The maximum baseplate temperature is primarily determined by the maximum internal junction temperature of the semiconductors within the power bricks. The term “thermal management” refers to the designer’s challenge of cooling these power bricks by considering the many levels for heat transfers via conduction (direct contact between solids), convection (contact with air or a fluid) and thermal radiation (electromagnetic infrared energy), both internal and external to the power module. 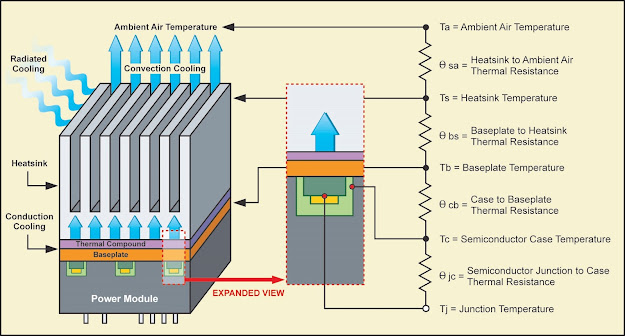 The diagram above shows the series-connected thermal resistances that impede the flow of heat from one level to the next. These impedances need to be considered, beginning with the internal semiconductor’s junction temperature relative to its case, the thermoplastic module case and its metal baseplate, and ending with a mechanically attached heatsink that conducts away the heat from the baseplate to the surrounding ambient air via natural or forced air convection cooling. Heatsinks are designed to cross thermal barriers primarily by substantially increasing the surface area that comes in contact with the ambient air, thereby providing enhanced convection cooling. Because the mating surfaces of the power module’s baseplates and heatsinks are not perfectly flat, some type of thermally conductive interface material is required to fill the tiny voids. This interface material can range from a thin layer of thermal grease to a custom designed silicon pad.

Selecting the proper size and shape of a heatsink and determining if forced air cooling is required are among the tradeoffs the designer needs to consider. This process begins with a detailed review of the power module’s specifications and knowledge of the end product’s heat loads, internal and external operating temperatures, space constraints, and available air flow sources, paths and restrictions.

The next step in this process is to determine the amount of power that will be lost (wasted) within the power module, based on its efficiency. This information for computing this is usually listed on the power module’s datasheet or installation manual, but it can also be determined by actual measurements of the input and output powers. For this example, we will use a typical AC-DC power module with a 48V/10.5A, 504W output rating, and a typical efficiency of 85% with a 120VAC input. By the way, the 85% efficiency rating is very good considering the fact that this module contains full-bridge rectification and active power factor correction AC front-end circuits as well as an integral DC to DC converter. In addition, this module has a maximum operating baseplate temperature, as measured at its center point, of 100°C. 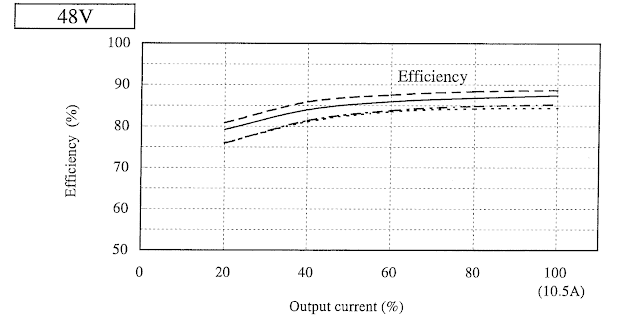 Based on the above information, to compute the internal power dissipated (wasted heat); we can use the following formula:

In this example, we would need a heatsink (with or without air flow) that provided a thermal resistance of 0.67°C/W. However, unless the heatsink includes a thermal interface material like thermal grease or a pad in its rating, we need to account for this additional thermal contact resistance (θbs), which can be on the order of 0.1°C/W. Therefore, the required thermal resistance of the heatsink itself, with the thermal interface material included, can be calculated per this formula and example:

The next step in this process is to review specifications for potential heatsinks that have a thermal resistance of 0.57°C/W. In this case, the power module has three optional heatsinks to choose from as shown in the chart below. 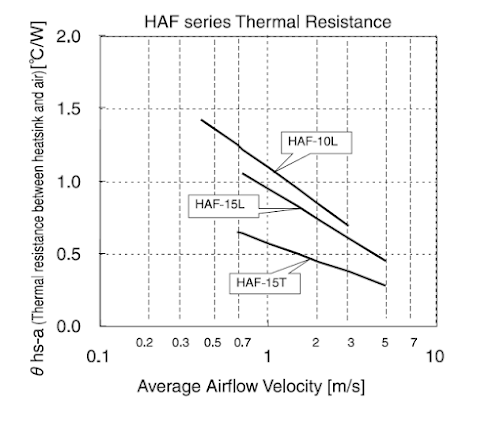 The Y axis of this chart shows the thermal resistance between the heatsink and the air (°C/W) and the X axis shows the required airflow velocity for the three heatsinks. In this example, we need to find 0.57°C/W along the Y axis and then move to right along the X axis to where it intersects a heatsink curve. In this example, 0.57°C/W intersects with the HAF-15T heatsink curve at about the 1 m/s airflow velocity point. Therefore, for this application we would select the model HAF-15T heatsink and would have to provide forced air cooling with an air velocity of 1 m/s. To translate m/s (meters/second) into LFM (linear feet/second), use this general conversion factor: 1 m/s = 200 LFM. In this example, since 1 m/s = 200 LFM of forced-air velocity, the fan required for this application must provide 200 LFM.
Based on the above, we have now determined the requirements for cooling this power module with a heatsink, thermal compound and forced air flow. If we wanted to be more conservative and improve the MTBF of the module, we would recalculate the required heatsink with the assumption that we wanted to keep the baseplate temperature at 85°C.

A word or caution should to be injected here. After going through the thermal calculations and selecting a heatsink, air flow, etc., the next step is to confirm the “paper-design” by running actual tests on a sample unit. The tricky part is to get access to the center point of the power module’s baseplate so you can measure the temperature at that point while the module is operating under load. One way to do this is to drill a hole in the center of the heatsink so the leads from a thermocouple can be mounted on the module’s baseplate and routed to your temperature measurement device.
In summary, we have shown how to determine the correct heatsink for power module applications. As the efficiencies of these devices improve the need for cooling will reduce, but the designer should always be aware of the heating effects from not only from the power module, but also from nearby devices. Therefore, it’s always best to run actual thermal tests with thermocouples attached to the power module and inside the end product to insure the design will be as reliable as possible.
Posted by Power Guy at 11:00 AM