I read an article in one of the publications we advertise in recently where an Engineer had designed a timing circuit, but when he tested it, the frequency was too high.  He rechecked his calculations and found out from the capacitor datasheet that the value of the particular multilayer ceramic capacitor he had chosen, changes with the applied voltage.


I did not pay much attention to it, being more involved with power supplies, until I was talking with one of our TDK-Lambda Engineers regarding non isolated POL (Point of Load) converters, and he gave me the same warning about the value selection of the filter capacitors.  This is covered in the ceramic capacitor datasheets under DC Bias characteristics.


POL converters rely on quite large ceramic capacitors on the input and output to reduce the effect of the fast transient currents drawn by FPGAs, (which can cause the output voltage to deviate), with values sometimes approaching 2,000uF.


The concern our Engineer had was that our customers might not know about this.  Intrigued I decided to investigate.  Below is the DC-Bias Characteristic for a 22uF 16V multilayer ceramic capacitor. 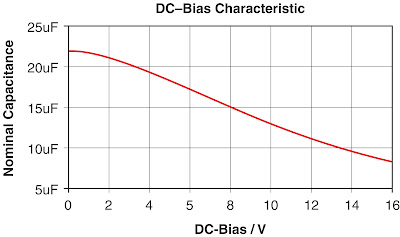 If a capacitor value of 22uF was recommended by the application note for filtering the 12V input voltage on a non-isolated converter and the user picked this particular part, in actuality, the real capacitance would be closer to 12uF.


Upon testing the filtering, the user might complain that the application note was incorrect, whereas in fact the capacitor datasheet had not been interpreted correctly.


Something to bear in mind!
Power Guy
Posted by Power Guy at 1:23 PM