I attended a technical briefing two years ago given by one of our Product Managers on TDK-Lambda’s 400W CFE series, and was shown the various ways the product could potentially reduce internal energy losses - particularly at very light loads – using features available from the power supply’s digital control circuits.  He did say that there were a couple of small side effects if all the features were enabled.
Recently one of our salespeople emailed me stating that in an off-load condition, his customer could hear a 10 kHz hissing sound coming from one of our 60W output power supplies and was curious if the unit was faulty.  Normally I would have asked about capacitive loading conditions or if the product was being grounded correctly.  Remembering the briefing I checked the product specification for no-load power draw.  Seeing that it was a low 200mW, I talked to one of our Design Engineers.
Before Energy Star legislation came into force, power supplies would often draw 5, 10 or even 20 Watts when in a no-load condition.  Apparently this was accounting for about four percent of the total electricity used in the .  Now most small power supplies will draw less than 300mW.  Although the legislation is aimed at consumer products like phone chargers, many industrial customers are now requesting similar energy saving products.
I was informed that many of the new power supply control chips employ advanced energy saving features, and what my customer was hearing was probably the converter going into “burst-mode”.
AC-DC power supplies above 70W will often have two converters in them; one is the boost PFC (power factor correction) converter which ensures that the input current is not drawn in big “gulps”, but more sinusoidal like the applied AC voltage.  An interleaved PFC converter shown below is used for this purpose.

The other is the main switching converter which chops up the high voltage DC from the PFC section and provides isolation, voltage step down, regulation and filtering.  A commonly used “half bridge” circuit is shown below. 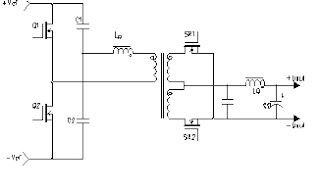 Back to the subject of hissing!  Without energy saving modes, both of these converters run continuously, regardless of the applied load.  Each time the FETs switch, energy is used by the gate drive circuits and lost in parasitic inductance and capacitance.
To avoid this, designers of control ICs have implemented features where the power supply engineer can have the PFC converter, the main converter, or both converters turn off for short periods of time, aka “burst-mode” or pulse skipping, during light loading.
This means that instead of the FETs being turned on every 10us for a power supply operating at 100 kHz, the FETs will be switched on for a few cycles say every 100us.  This is enough time to replenish the internal capacitors with energy and keep the output voltage in regulation.
The upside is much less power is dissipated in the power supply, but the downside is that instead of the product operating at 100 kHz (well above the human hearing range) a faint hissing might be audible as the burst mode operation operates at 10 kHz.
If the energy saving feature of the control IC is fully maximized, whereby a much longer interval between bursts is enabled, an increase in output ripple may be also observed.  Often this is acceptable to the end user provided that the output voltage remains regulated.
My suggestion to the salesperson was to offer our customer an alternative power supply that had a slightly higher off load power draw, but no burst-mode operation.  That suggestion was accepted.
Power Guy
Posted by Power Guy at 9:15 AM